“Whenever you see difficulty – smile! because God has paired ease with it.”

FOR MORE KEY INSIGHTFUL KNOWLEDGE LIKE THIS, LISTEN TO IMAM ABDUL LATIF FINCH’S KHUTBA (SERMON) ON

‘PEACE WITH GOD IS PEACE WITH WHAT HE WANTS TO DO’

Click on image below to LISTEN to the khutbah (sermon)… 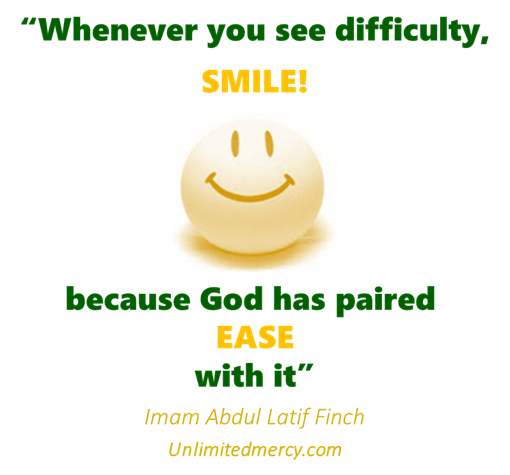 Imam Muhammad Abdul Latif Finch co-founded the Lighthouse Mosque in Oakland, California where he served as the Imam till for 3 years until he resigned in 2012 to focus on his graduate studies. In addition, he was a teacher and a program developer for Deen Intensive Foundation, Seekers Guidance and has assisted Zaytuna College ‘s Summer Arabic Intensive program for three years in a row.

Imam Muhammad Abdul Latif Finch has recently attained a Master’s degree in Philosophy from the Dominican School of Philosophy and Theology, a member of the Graduate Theological Union in Berkeley.